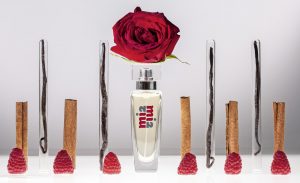 And this is how mi2 smells:

With a very long-lasting, convincing presence and perceptibility in its scent development, mi2 envelops you like a second skin. Its play of fragrances is illuminating, uplifting, charming, expressive and energizing!
The main actor in this play is a magnificent rose scent that speaks of love. A scent impossible to get enough of!

In this perfume creation it has a celestial meaning.

The rose, known as the queen of flowers, is also associated with a very special angel, the angel Barachiel! He is the angel of blessings and miracles!

Coming from the sacred power of the Virgin, „love“ can express itself in the fragrant manifestation of the rose in special moments, and be granted to mankind.

The prelude of hesperidic notes like grapefruit uplifts you immediately.
In addition to fruity raspberry, the head note in mi2 discloses a choice, fragrant essence said to bring luck! 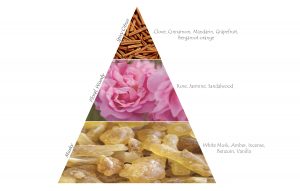 When the sky revealed its scent

Since then, the rose has been symbolic of love!

Its miraculous scent as an essential oil vibrates with the high frequency of measurable 320 MHz ( megahertz ).
My intension to develop a perfume which represents the angels was known by heaven and the following miracle
was decisive for the fragrance character of mi2:

In the year 2014 something whimsical happened to me during the summer in the period of 14 days.
I have been surrounded, surprisingly, at intervals with the perceptibility and presence of a rose fragrance directly
which did not physically existed since I was neither in contact with rose essence, nor any roses found near me!

This event had to be realized first and I was amazed and touched by it.
It became clear to me that this was a heavenly presence that was revealed to me in this way and form.

So the rose chose itself by heavenly guidance into the perfume creation and would like to communicate with you
in love and also touch you!

Led by angels, mi2 has been created to inspire a touchability and contact between heaven and earth over the fragrance!